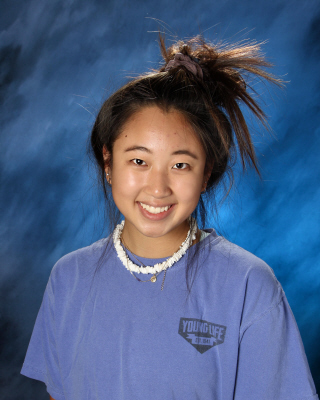 The University of Southern California is one of the most prestigious and known public colleges on the West Coast. The school is known for its academics and sporting achievements, as well as difficulty to get into the school in the first place. Liberty senior Allison Kim will be attending USC in the fall, and she will be one of a line of Kims striving for success and a greater education.

Only one of her four grandparents was able to get a college degree after immigrating to the US from Korea. Both of her parents pursued medical degrees, and her dad went to USC, making her a legacy student.

“My mom went to Wellesley College, so that was my other option if I were to choose to follow in my parents’ footsteps. But ultimately, California won me over,” Kim said.

But Kim knew she wanted to go to California way before this year.

“I’ve wanted to go to college in California since I was 5 years old,” Kim said. “Since my dad went to USC, I grew up watching USC Trojans football, basketball, and volleyball games, so it has always been my dream school.”

Even though she had been dreaming of USC since she was little, she received her acceptance letter with a calm composure.

“USC was my top choice, but it was weird because my reaction was kind of relaxed until the day after, when it really set in,” Kim said.

In the fall, Allison Kim will be studying marketing at the Marshall School of Business at USC. Kim has already been in contact with a few other USC future freshmen, and one of her roommates is even a fellow business major. She feels right at home with her peers.

“I’ve become friends with a handful of USC ‘24 students already and they’re very similar to me, which is cool,” Kim said.

Although Kim is attending USC in the fall, like many other students, she was considering taking a gap year.

“I was thinking of taking a gap year but with the coronavirus, I wouldn’t be able to travel where I would want to travel. Because of this, college seemed like the best choice for me. I might take a year off after college to travel, though!” Kim explained.

If she were able to travel, she wouldn’t just take the traditional “backpacking across Europe” route to gap years. She was looking at something a bit more adventurous.

“If there were no travel restrictions, I would want to travel abroad on a boat and sail from Thailand to South Africa. There is a program where I would be able to get some credits from a college in Florida with this trip! But obviously, a boat is not a good idea at this time.”

Although she won’t be going to Thailand or South Africa this year, she is still very excited for the sunny prospect of moving to California. “I am most excited about the weather in southern California,” Kim said. “I am definitely a beach person, so that is a huge plus. Mostly, I wanted to get out of Washington and try something new!” Thank you for all that you have done at Liberty, we wish you the best in this new chapter of yours!