Here’s the truth about what to do after high school: you have more options than you think. 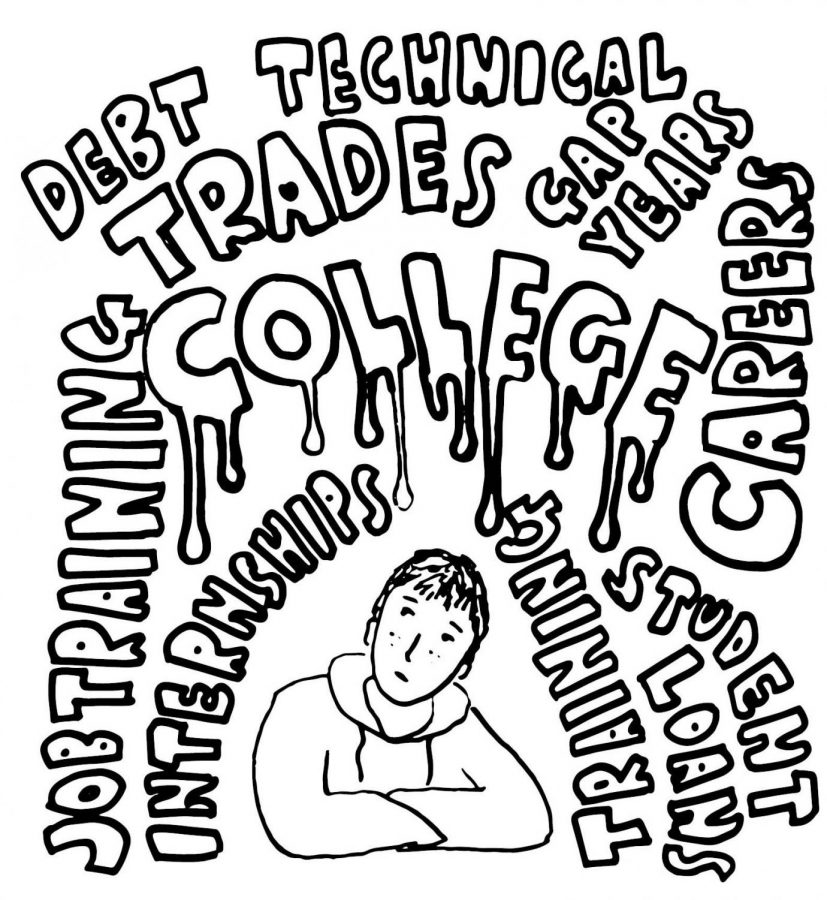 Is college the right option for every student?
“No. Absolutely not. It’s not a good fit for everyone. That’s not to say some people are less intelligent or skilled than others. College is simply not the ideal path for all students,” Liberty’s college and career specialist Kristin Brown said.
Going to a four year college after high school is often the ‘expected’ path of high school students. There’s a lot of factors going into the record-setting highs of college enrollment rates. Whether it’s pressure students put on themselves, pressure from other students, or pressure from parents, applying to college can seem like the only option for high school students, and going to college can feel like the expectation.

In reality, four year college is only one of many options available to students after they graduate high school. Trade school or vocational school, technical training, certifications, gap years, and apprenticeships can be just as legitimate of pathways to successful careers as attending a four year college.
“What’s happening right now is there are so many kids going to college that there are too many college graduates, and the economy can’t even support all the highly educated workers since there aren’t enough jobs,” Brown said.
This means there are increased rates of students graduating college and either ending up in jobs they’re overly educated for or ending up without a job at all since they’re competing against hundreds of other applicants with the same qualifications. This results in higher prices for college classes and less job opportunities for college graduates. It also results in lack of workers in the trades and technical work.
Lab technicians, real estate agents, metal workers, electricians, types of engineers, detectives, police, and contractors are positions that are frequently in high demand. Workers make similar money to their college graduate counterparts, and yet they don’t have a college diploma. They might have a technical degree, which can be obtained anywhere from 6 months to 3 years, and although technical education may come with a fee, the sort of crippling long-lasting debt resulting from paying for college is nonexistent.
For students who don’t want a cubicle job, are able to think mechanically, would rather specialize than achieve general education requirements in subjects that may be unrelated to their career future, want to save time and money, or like hands-on work more than office work, going into training or receiving a technical education following high school may be the best option.
Another non-college option that’s often overlooked is the gap year. For fear of their students “not wanting to go back to school,” parents oftentimes don’t support this choice. Gap years are sometimes spent traveling or volunteering. The gap year can also be a viable option for saving money for college. Especially for students whose parents aren’t paying for their college, or for students that don’t qualify for scholarships, students have the option to work for a year to mentally and financially prepare to commit to a four year college.

“Gap years are stigmatized, but the thing is, students who take gap years are statistically proven to do better academically in college than their peers who go straight into college after high school,” Brown said. Gap years are definitely stigmatized. In our society, more specifically in our Liberty community, college is often viewed as the only ‘successful’ post high school option for students, and all other options, such as trade school, and gap years, are looked down upon. In many cases, students would rather tell parents they’re going to community college than choose a separate path for themselves.

The irony is, there’s an “overeducation” trend in American schools. There are too many college graduates in comparison to the amount of jobs requiring high levels of education, so many college graduates find themselves not only in deep financial debt, but fighting to get jobs that fit majors, or settling for jobs they’re overeducated for.
Statistics show that jobs in the trades are in increasingly high demand. These are jobs that have the potential to pay very well. Statistics also show that gap year students have not only lower dropout rates, but higher grades than students that rush into college after high school.
Having a college diploma to fall back can be a good option. But it’s not the right option for everyone, and there are countless other education and career options that have nothing to do with traditional four year college.